Morgan County, known for its beautiful rural scenery and Antebellum homes, was formed from sections of Baldwin County in 1807. The City of Madison has been the county seat since its incorporation in 1809. Morgan County is also home to the City of Rutledge, founded in 1845, the City of Bostwick, and the Town of Buckhead, founded in 1891. Apalachee and Godfrey are also among the list of Morgan County’s communities. Morgan County is also the home to one of Georgia’s largest state park, Hard Labor Creek State Park which offers visitors amenities that include golf, swimming, hiking, fishing, horseback riding, and cabins. Morgan County also includes part of Lake Oconee, a 19,000 acre reservoir providing some of the state’s best fishing, water skiing, boating, camping, picnicking, championship golf and tennis, as well as beautiful lakefront homes.

The Cities and Towns of Morgan County 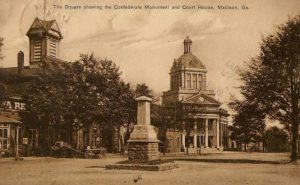 The first town lots in Madison were sold in 1809. As the cotton economy of the county expanded, so did the population of Madison. Many of the wealthy plantation owners who lived in the county began building town houses. Many of these Antebellum homes can be seen on the walking/driving tour of the historic district. In 1844 the first of three great fires struck the community. The county courthouse, begun in 1809 and finally completed 15 years later, burned to the ground. However, most of the county records were saved. In 1869 the entire business district burned after fire broke out in Albert Shaw’s furniture store on South Main Street. Twenty-six businesses were destroyed. The heat was so intense that many of the salvaged goods placed in the middle of the street burned also. In this fire, the city hall and all the town records were destroyed. The community began rebuilding immediately; however, it took ten years before all the burned out lots had a building on them again.

Then, in 1916, the old courthouse caught fire, and this time all the city’s records were lost. Madison faired better during the depression than many of its neighbors. Many of the owners of the large antebellum houses were forced to convert their homes to apartments to make ends meet. The advent of Interstate 20 and the construction of Lake Oconee in the 1970’s greatly accelerated Madison’s growth. Although Madison is a thriving, growing community, its citizens aim to keep the past an integral part of the present and future. Successfully blending old with new and southern tradition with high-tech, Madison-Morgan County, Georgia, has been bringing tourists, newcomers, and local residents together in a unique, unspoiled atmosphere.

Madison’s Antebellum homes and Victorian homes, as well as its tastefully restored downtown, offer a wide range of shops, tastes, sights and services that delight visitors from this country and abroad, as they travel along Georgia’s Antebellum Trail, the Georgia Antiques Trail and the Historic Heartland travel region.

Shopping, dining, and overnight accommodations support the bustling hospitality and recreation industries. Nearby Lake Oconee is a favorite retreat for Atlantans and snowbirds alike with its world class golf and tennis resorts.

The historic city and county are often said to be like “walking into a Norman Rockwell Painting.” Life in Madison and Morgan County moves with a slower, more personal pace. Neighbors and friends still visit with one another under the shade trees that line Main Street. Farmers come to town on Saturdays. People here are genuinely friendly and will stop and open a door for you or speak when you walk by.

Agriculture is strong here, as the outstanding piedmont soil has long nurtured our crops. Hay, cotton and cattle are a major source of pride and income for the residents of Morgan County. Its rich agrarian roots can be seen in every facet of local life.

The outstanding quality of life in Madison and Morgan County is the primary reason for the location of many of Madison’s corporate residents. A growing number of national and international corporations are choosing Madison for their corporate headquarters. The outstanding workforce and the close proximity to major distribution networks have made Morgan County the choice location for high-tech manufacturing.

It is the people that make Madison and Morgan County special. Their resourcefulness and hard work is evident in the thriving local economy and exceptional lifestyle. Opportunities abound for citizens to play meaningful roles in the community through participation in its abundant civic, social, fraternal and religious organizations.

Madison and Morgan County was a favorite destination during the Centennial Olympic Games in Atlanta in 1996. We have hosted the world, let’s see what we can do for you…